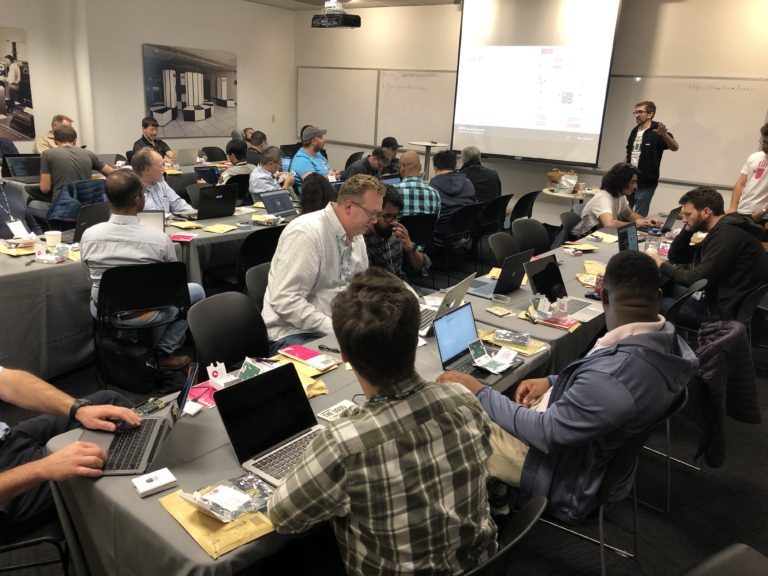 Just got back from the Arm AIOT Summit, the 500-developer AI and IoT conference my team has been helping to plan for the last 6+ months. Overall a great event, a lot of hands-on workshops, key developers and technical leaders and a quite amazing turn-out.

The reason we put this event together is that we felt strongly that the number of developer solutions enabling low-power AI on Arm (especially microcontrollers) has been rising dramatically. Google’s TensorFlow Lite has been essential for enabling this activity. So far we have seen AI modules or support from Adafruit, Arduino, Particle and SparkFun and we suspect this is just the beginning. I won’t go through everything that happened this week, here are a few highlights.

The event was kicked off by Arm’s Director of ML Ecosystem, Kathleen Kallot. The keynotes included Simon Segars (CEO of Arm) and Jem Davies who leads our ML group.

There was a quite strong “tech for good” element to the event. It is good to talk a lot about the underlying technology but mapping it to use-cases that actually help people is always welcome and interesting. Fortunately, through Arm’s sustainability efforts, we are in touch with a lot of people who are doing “just that.” Kidus Asfaw who leads Innovation efforts at Unicef has done a lot to further these efforts.

We have spent a lot of time building out the Arm Innovator Program to support people like Kwabena from OpenMV. We had a nice keynote by Chris Anderson who has been a big supporter of the OpenMV cam (low cost AI camera that provides developers with a $35 and 5-minutes to AI experience.

The famous @chr1sa at @Arm AIOT DevSummit: “The future looks like a toy” when it comes to autonomous vehicles. The industry has come around to this thinking, everyone now embracing the @diyrobocars approach to disruption #armaiotdevsummit pic.twitter.com/rr0Zb5nBYq

Chris Anderson has a strategy of market-making by starting with a low-cost reference platform and then building a community. He used this method to launch the hobby drone industry and he is doing the same with the hobby autonomous vehicle industry. His talk was on how he expects the autonomous vehicle market to repeat the pattern of disruption we saw in consumer drones.

There are two approaches to avoiding obstacles: Being careful or being nimble, developing reflexes to respond to obstacles in the road. @diyrobocars takes the latter approach, while the rest of the industry takes the first approach. @chr1sa #armaiotdevsummit pic.twitter.com/XrcDnzGeIk

A $60 camera can control an entire autonomous vehicle. That alone is enough to navigate the courses. Nice call out to @openmvcam @chr1sa #armaiotdevsummit pic.twitter.com/Np5xsJbExR

How is it possible that we can now do deep learning at the edge and build such low cost autonomous vehicles? Here are a few of the key technical advancements #armaiotdevsummit pic.twitter.com/Im6UVZ0LL0

Chris provided some technical details about what has changed in the market to allow the construction of sub-$300 autonomous vehicle platforms. My personal opinion is that he is on to something and the rest of the industry seems to believe similarly.

Not sure if anyone has mentioned this yet but the lanyards for @Arm AIOT DevSummit are hand crafted by @KidzPositive, a group from South Africa who help generate income for mothers caring for HIV positive children #armaiotdevsummit pic.twitter.com/lUzJxMpCUQ

On the tech-for good side. The lanyards for AIOT Summit are provided by Kidz Positive, an initiative from Africa which helps create work for mothers caring for HIV positive children. They make the beads and sell them and the proceeds go back to the mothers.

One benefit of my job is getting to spend a lot of high quality time with Massimo Banzi, creator of the Arduino. I have worked with Massimo for years starting at my role in Intel New Technology Group and continuing on for my work at Arm.

99.99% of the time spent commuting many compute jobs to the cloud is wasted, 10,000x slower than solving a problem at the edge without REST & Databases. @simoncrosby @swim #ArmAIoTDevSummit pic.twitter.com/9TlHtJ8IOE

We had our friend Ian Crosby from Swim (a fellow Seattle / Bellevue native) on stage to talk about his work to enable edge AI.

Nice talk by Kwabena on the latest OpenMV Cam H7+. Provides a really nice, more powerful solution for rapid AI on the edge.

Over 50 people at the @sparkfun Arm AIoT workshop, on our way to building speech recognition, person detection, and a magic wand! pic.twitter.com/I1mR8XDSuk

I am past the time when I would spend my days hacking away at the hardware but this SparkFun Artemis workshop featuring AmbiqMicro and Google TensorFlow Lite Micro was quite nice. Very crowded, as well.

So thats my recap. I didn’t cover everything but I wanted to put something together for my blog relaunch. I’m going to hopefully have some nice content here in the future tracking my activities and the people I meet. Hope to see folks stopping by, subscribing to say hello.